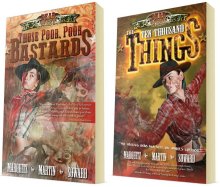 Entry via Rafflecopter below.

Stalked across the Great Basin by an evil they hardly understand, Nina Weaver and her hard-bitten bunch o’ ragtag death-dealers have learned one crucial lesson: the only sure thing in life—and death—is a loaded gun.

‘Deaduns’ and other horrors have come a’callin’, and Nina struggles to uphold unlikely alliances as the stale waft of rot threatens to overrun the West. Can Nina and company stand against...The Ten Thousand Things?

'THE WALKING DEAD AND HELL ON WHEELS COLLIDE!'

THE YEAR IS 1868. Somewhere in the high mountains of the Sierra Nevada near Donner Pass, during the expansion of the Central Pacific Railroad, NINA WEAVER and her pa, LINCOLN, trundle into Coburn Station with a wagonful of goods they're looking to barter. Of all the rotten luck, their world, and the future of the American West, is forever changed when a strange and sudden swarm of zombies--called deaduns--invades town on the hunt for some human-sized vittles.

There is action aplenty, there is furious gunplay, there are characters knee-deep in the blood and guts of their eviscerated friends. This is a high octane story, but what makes it stand out among the rest is the drama between the human characters..."

THOSE POOR, POOR BASTARDS ARE...

Protagonist and Shoshone half-breed, NINA WEAVER Her hard-bitten, mountain man of a father, LINCOLN WEAVER The handsome and secretive JAMES MANNING, whose quick draw is greased lightning MASON DAGGETT and his brother MEAN GEORGE, a shifty pair of ex-Confederates RED THUNDER, a stoic Nez Perce Indian who believes in the Land and its People CPRR railroad boss J.H. STROBRIDGE and his man LESTER 'WOODIE' WOODRUFF with his explosive Swedish oil concoctions FATHER THOMAS MATHIAS, a Jesuit missionary who can work 'turn' the undead, but has everyone wondering which side he's on And a few more UNFORTUNATES to round out the crew (deadun bait?)