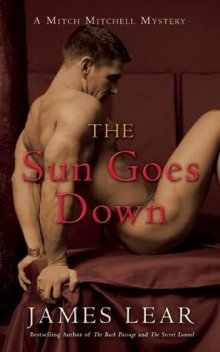 Excerpt: The Sun Goes Down by James Lear

The Sun Goes Down

Mitch arrives on the small Mediterranean island of Gozo, taking a holiday to escape from domestic and sexual trouble at home. He’s been invited by Bob Southern, a fellow doctor now working at the army garrison at Valetta, who wants to consult Mitch on a delicate matter’.

Bob is concerned by the apparent suicide of a young lance corporal, Ned Southern, who plunged to his death from Gozo’s cliffs. The authorities said he was being blackmailed, but Ned’s grief-stricken lover Alf insists that he was murdered. Suspecting an official cover-up of a queer scandal, Mitch gets to work on an investigation that leads him into a labyrinth of lies, false identities and secret sex.

As another body is washed up on the rocks, a gallery of suspects begins to form. Claire Sutherland, the ageing stage star who knows all the gossip on the island; Henry Jessop, the beautiful youth who may not be as innocent as he looks; Joseph Vella, a ladies’ man with a deadly secret; Major Telford, whose ?artistic’ photographs of the island men may tell a more sinister story?

With tension, humour and plenty of Mitch Mitchell’s exuberant sexual encounters, The Sun Goes Down cranks up the Mediterranean heat!

I sat awhile, watching Henry shouldering his burdens, enjoying the way his shirt stuck to his damp back and revealed something of the smooth curves beneath. We could all do with a bath. The sea looked mighty inviting. I said as much as I got up.

“We do not bathe in the sea,” said his father, scowling at me through tortoiseshell glasses. “It is particularly treacherous here.”

I looked out at the calm blue waters, so smooth they reflected the yellow sandstone of the cliffs like a mirror. “Looks okay to me. I can’t wait to jump right in.”

“At your own peril,” said the father. Henry tutted and sighed. I caught his eye and smiled. He blushed as he struggled with the bags his parents refused to consign to the porters.

“Let me help you with that.” I picked up a suitcase. His parents squeaked in dismay, but their son had better manners.

“Don’t worry, folks. I’m not going to steal anything.” Except your son’s cherry, perhaps. “After you.”

The family got down from the bus, glancing back all the while to ensure I hadn’t vanished with their precious luggage. I followed.

We were standing on a cobbled promenade, tiny shops and houses on one side, the Mediterranean on the other. There was nothing remotely resembling a hotel to be seen.

“Come, come,” said the driver, beckoning towards a dark, narrow alley between two ancient buildings. “Hotel. Here, hotel.” Shallow steps led up into the gloom. Claire Sutherland was way ahead of me, heels ringing like gunshots on the stones.

“Isn’t there an easier way?”

“God no, darling. One of the many charms of this island, to which you will soon become accustomed, is that there’s no easy way to do anything. Cars and buses and suchlike can’t get anywhere near the dear old Continental. A donkey can just about struggle up these steps, but that’s it. One has to rely on the boys.” She was carrying nothing but her purse and the portable wealth with which she adorned her fingers, neck and ears. Only a brave woman walks down dark alleys with that much ice on display, but I guess Miss Sutherland knew what she was doing. One slug from those expensive knuckle-dusters would lay anyone out.

The rest of the party tailed behind us. After a minute’s climb we emerged into a dazzling square of light; once my pupils had adjusted I saw white walls surrounding a sandy courtyard, trees and shrubs in neat beds, a pillared door with a fancy tiled surround and, tinkling merrily in the middle of it all, an ornamental fountain.

And out of the cool, dim interior emerged a young couple, a beautiful woman and a handsome man, smiling and stepping towards us with hands outstretched.

“Welcome to the Continental,” she said. “We’re so happy to have you.”