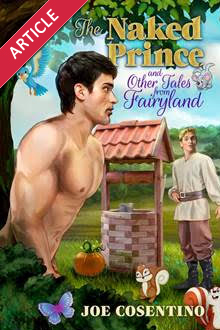 The Naked Prince and Other Tales from Fairyland by Joe Cosentino

I am happy to have with me today, Gideon Golden from “The Golden Rule” in Joe Cosentino’s new novella from Dreamspinner Press, THE NAKED PRINCE AND OTHER TALES FROM FAIRYLAND. Since the readers can’t see you, what do you look like Gideon?

The first thing everyone notices about me is my long, curly, golden hair. The three guys who took me in after my parents disowned me for being gay nicknamed me, Goldie Locks. I have blue eyes and a strong body from building houses with the three guys I live with on Bear Mountain.

How old are you?

Eighteen. I’m pretty inexperienced in matters of the heart. Jack was my first, but he nimbly jumped over the candlestick pretty quickly.

You mentioned your parents threw you out of your house. How did that make you feel?

Totally lost and alone. I didn’t know where to turn. I walked around the woods and came upon an abandoned cottage with food and beds. I found out later it was the home of three big, burly, hairy brothers, Bo, Butch, and Ben.

Did you ever think you would end up with Ben?

No way! When Ben found me naked in his bed, he got really angry. We hit it off like Peter Pan and Captain Hook. Once we started working together (building a new wall for Humpty Dumpty), and eating together, and living together, things changed. We fell in love. But it wasn’t a smooth yellow brick road journey. We had quite a few misunderstandings, including about Ben’s ex, the Woodsman.

And that’s the story of “The Golden Rule?”

Why haven’t we seen gay fairytale characters in mainstream fairytales or movies?

Great question! Joe Cosentino wondered that himself. As a kid Joe’s older sister read him fairytales in bed every night before sleep. When he could read, he read them himself. Joe was entranced by the riveting stories of peasants becoming princes and princesses and finding true love. The stunning locations, wonderment, humor and tragedy, and happy endings filled his young mind like pennies in a counting jar. Joe wanted to be a character in those stories, live in those palaces, dine with the charming princes, and bring happiness to everyone in the kingdoms. Later as an adult, he wrote musical plays based on fairytales for professional theatre companies: Princess and the Pea, The Nutcracker and the Mouse King, Aladdin, The Emperor’s New Clothes, and The Legend of Sleepy Hollow. But here’s where I came into the picture. Joe recently reread many of his favorite fairytales, and he was upset to see no openly gay characters in any of them! So he asked himself, ‘Why aren’t there gay people in fairyland? Why can’t a peasant boy fall in love with a handsome prince (or a bear)? Wouldn’t a homeless blond boy seek refuge in a house with three hunky bears? What was Pinocchio’s growing appendage really all about?  Did Jack enjoy his time with the Giant more than Jack ever let on? Could the Snow Queen be a handsome prince with a heart of ice? What’s the good of fairy dust and fairytales without any fairies?’ Miraculously I and the other characters in The Naked Prince and Other Tales from Fairyland were born in Joe’s mind in four humorous, romantic, adventurous, touching, and gay tales. How lucky am I to star in one of them!

What are the stories about?

“The Naked Prince” is a different take on the Cinderella story. Cinder, a poor and beautiful young man who designs clothing, makeup, and hair for his stepmother and stepsisters, offers his clothing and slippers to a naked stranger in the woods who turns out to be none other than me, Prince Charming. Will Cinder and I confront our manipulative mothers, bring equality to the kingdom, find ourselves, and find one another? I can give you a hint. We are still living happily ever after together in Fairyland. In “The Golden Rule,” when he is caught with nimble Jack, eighteen-year-old Gideon Golden is thrown out of his home in Fairyland by his homophobic parents. With nowhere else to go, he breaks into the home of three men living on Bear Mountain. Bo and Butch enjoy having a young roommate, but Ben isn’t convinced. Will Gideon and Ben make vinegar or honey? “Whatever Happened To … ?” takes place on Christmas Eve. A reporter living on Andersen Lane interviews a celebrity for the Queen Newspaper series, “What Ever Happened To … .” Friction ensues between the celebrity with the growing appendage who can’t tell fact from fiction, and the reporter who has a thing for giants. Eventually a romantic spark is lit between the two as Christmas Day arrives, and they realize they have more in common than living in Fairyland. Finally in “Ice Cold,” after losing their families during the great ice storm in the northernmost kingdom of Fairyland, young Gaelen and Kieran pledged their love for one another. When Isidore rides into Frost Village on his elaborate sleigh, Kieran follows the handsome prince to his castle in Arctic Kingdom, where Kieran becomes Isidore’s bewitched slave. This leads Gaelen on an amazing adventure to find his true love and melt his frozen heart. All four stories are terrific, but I like mine and Cinder’s best.

Who is your favorite character in THE NAKED PRINCE AND OTHER TALES FROM FAIRYLAND, besides yourself?

Ben of course! Not only is he handsome, muscular, and a great house builder. He is so sweet, caring, warm, and wonderful. How lucky I was to find him in that cottage in the woods.

Will you be starring in more of Joe Cosentino’s books?

This is it for me. However, all of his books are great. If you haven’t yet, also check out AN INFATUATION (Divine Magazine’s Readers’ Poll Award for 2nd Place Best LGBT Romance of 2015), A SHOOTING STAR, and A HOME FOR THE HOLIDAYS from Dreamspinner Press. If you like mysteries, don’t miss out on DRAMA QUEEN (Divine Magazine’s Readers’ Poll Awards for Best Mystery, Best Crime, Best Humorous, and Best Contemporary Novel of 2015) and DRAMA MUSCLE Nicky and Noah Amazon bestselling mysteries from Lethe Press. And Joe told me he is working on a new series about a gay resort at the New Jersey shore, COZZI COVE: BOUNCING BACK and COZZI COVE: MOVING FORWARD coming soon from Nine Star Press. I wonder, is the New Jersey shore anything like Fairyland? Joe tells me it is quite different, but there are some bears there!

Joe will get any messages to us. He loves to hear from readers. It gives him a break from hearing from characters like me. They can contact him at: http://www.JoeCosentino.weebly.com

Cinder, a poor and beautiful young man who designs clothing, makeup, and hair for his stepmother and stepsisters, offers his clothing and slippers to a naked stranger in the woods, who turns out to be none other than Prince Charming. Follow Cinder and Prince Charming in this twist on the classic Cinderella tale as they discover their inner strengths and find their very own happily ever after.

Enjoy The Naked Prince and three other reimagined tales from Fairyland, each with a unique spin on stories we all know and love, including The Golden Rule, where eighteen-year-old Gideon Golden, after being thrown out of his home in Fairyland by his homophobic parents, breaks into the cottage of three burly men on Bear Mountain.

In Whatever Happened To…?, friction ensues between a celebrity with a growing appendage and a reporter who has a thing for giants.

And in Ice Cold, young Gaelen must save his love, Kieran, after a handsome but evil prince freezes Kieran’s heart and bewitches him into being the prince’s slave.

Things were looking grim in Fairyland. Gideon Golden’s parents had come home sooner than he expected. So the eighteen-year-old yanked up his overalls and posed in front of the hearth as if he had not just lost his virginity.

Jack, tall and lean, pulled up his pants, patted down his rumbled auburn hair, jumped over the candlestick, and ran out of the small thatch-roofed golden cottage, calling over his shoulder, “It was fun, buddy.”

Looking at the shocked expressions on his parents’ faces, Gideon trembled in his clogs. Sweat ran from his forehead down his handsome face, just missing his crystal blue eyes and falling onto his powder blue shirt. As he anxiously awaited his parents’ reactions, Gideon noticed his curly golden-blond hair was matted against his neck.

Gideon’s short, portly mother and tall, pole-thin father, wearing an umber dress and suit respectively, glared at their son like a knight facing a dragon.

“How long has this been going on, Gideon?” Gideon’s mother asked in a nasal rage.

“Will you be silent, Minerva? As the man of the house—” Gideon’s father glared at him. “—apparently as the only man, I will choose the questions to ask Gideon.” He took in a deep breath. “Now, Gideon, how long has this been going on?”

“I met Jack this afternoon when I went for a walk on the little bridge over the brook,” Gideon explained. “Jack is a very nice boy.”

Gideon’s father grabbed his son by his ear. “That’s the point, Gideon. Jack is a boy. And you are a boy.”

“How could you do this to us?” Gideon’s mother cried.

“Will you stop your incessant prattle, Minerva?” Gideon’s father said with a stern look on his narrow face. He pulled on his son’s hair. “How could you do this to us?”

“And right in our own cottage!” wailed Gideon’s mother.

“He knows where he did it, Minerva,” Gideon’s father said.

Gideon replied, “Jack wanted to do it on the bridge, but the Baker and his Wife were nearby picking blueberries.”

“Not the Baker’s Wife!” Gideon’s mother said with a hand clutching her heart. “Katatonia is in my spinning wheel group. I will never be able to look at her over a spindle again!”

Gideon’s father sat at their wooden table with his head in his hands. “That bridge is near the coal mines. I’ll be a laughingstock if those gossipy dwarves saw you.”

Joe Cosentino is the author of An Infatuation and A Shooting Star (Dreamspinner Press), Paper Doll the first Jana Lane mystery (Whiskey Creek Press), Drama Queen the first Nicky and Noah mystery (Lethe Press), and The Nutcracker and the Mouse King (Eldridge Plays and Musicals). He has appeared in principal acting roles in film, television, and theatre, opposite stars such as Bruce Willis, Rosie O’Donnell, Nathan Lane, Holland Taylor, and Jason Robards. His one-act plays, Infatuation and Neighbor, were performed in New York City. He wrote The Perils of Pauline educational film (Prentice Hall Publishers). Joe is currently Head of the Department/Professor at a college in upstate New York, and is happily married. His upcoming novels are A Home for the Holidays (Dreamspinner Press holiday novella), The Naked Prince and Other Tales from Fairyland (Dreamspinner Press short stories novella), Porcelain Doll the second Jana Lane mystery (Wild Rose Press), and Drama Muscle the second Nicky and Noah mystery (Lethe Press).