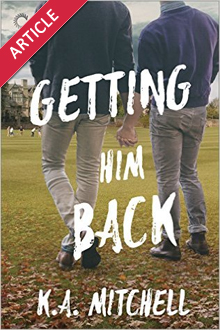 The Importance of Love Scenes in Romance by K.A. Mitchell

Don’t You Close That Door!

A lot of people try to dismiss the romance genre as “just sex.”

First of all, if you refer to it as “just sex” you aren’t having it right. Just saying.

Romance novels are love stories. They’re about people connecting on a deep emotional and physical level. As a writer, I could never shut the door on that moment of connection. Where else are we as naked and vulnerable, where else do we show as much of ourselves as when we are locked with another body? To leave it out or fade to black in a story that is focused on the relationship and the growth of the characters seems like a hard way to write. A romance without love scenes is a war movie without a battle, a mystery novel without a puzzle, a western without a horse in it.

Imagine the characters of a book are searching for a lost treasure. We’ve been hearing about the treasure since the first chapter. We’ve seen a hint of what it might be. But just as the characters find it, the chapter ends. The next chapter begins and they’re talking about how cool the treasure was, and by the way, that monster guarding it was scary, but fortunately, only Bob was eaten. As a reader, I’d feel cheated. That’s how I feel if the characters of a love story are having big, sensual moments without bringing me, the reader, with them.

That’s not to say that a love story has to have explicit sex with lots of graphic detail in it in order to work. (Though if it does, it may move to the top of my TBR pile). But even for a reader like me, it’s not the actual body parts inserted or rubbed or licked that matter as much as what the characters behind those body parts feel. A writer can move me to tears with a sweet little kiss if the feelings behind it are big, but if the writer shuts the door and picks up the next chapter after those moments of tension and vulnerability, I feel as if the story is happening without me.

Put on some dim mood lighting and a gauzy curtain if that's your style, but don't close the door on your reader for those intimate moments that make the whole emotional journey all the more satisfying.

Ethan may have followed his high school sweetheart to college only to get dumped his first day there, but he’s not going to let that stop him from exploring all his new life has to offer. Sex-only hookups, his photography, new friends and a campus-wide game of zombies vs humans all help keep his mind off his broken heart and move him toward building a new, better life without his ex.

And then there’s Wyatt. Mysterious, grouchy…hot. And possibly not gay. But Ethan’s not going to let that stand in the way of figuring out what makes Wyatt tick. New college goal? Get Wyatt into bed and into Ethan’s life.

Step one: arrange a “tutoring” date. Step two: “accidentally” bump into Wyatt as often as possible. Step three: explore the sexy body under that ever-present hoodie. And when their friendship deepens into something neither of them expect, convince Wyatt he’s not just a pity fling or a one-time hookup, but that Ethan is in it for the long haul.

MORE IN THE SERIES

K.A. Mitchell discovered the magic of writing at an early age when she learned that a carefully crayoned note of apology sent to the kitchen in a toy truck would earn her a reprieve from banishment to her room. Her career as a spin-control artist was cut short when her family moved to a two-story house, and her trucks would not roll safely down the stairs. Around the same time, she decided that Chip and Ken made a much cuter couple than Ken and Barbie and was perplexed when invitations to play Barbie dropped off. She never stopped making stuff up, though, and was surprised to find out that people would pay her to do it. Although the men in her stories usually carry more emotional baggage than even LAX can lose in a year, she guarantees they always find their sexy way to a happy ending.