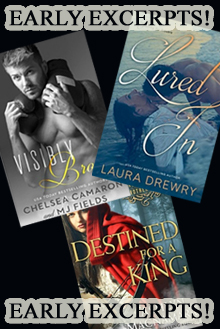 Romance: Early Sneak Peaks of Visibly Broken by Chelsea Camaron & MJ Fields, Destined for a King by Ashlyn Macnamara and Lured In by Laura Drewry

These books release in September 2016.

In a powerful, smoldering novel from the bestselling authors of the Caldwell Brothers series (“Bad boy heroes to die for!”—Tracy Wolff), two tortured souls team up to overcome the past, finding the courage to heal . . . and to love.

Jason “Cobra” Stanley was born to fight. With a father like his, he had to toughen up just to survive. Now Cobra tries to take out all of his frustration, all of his anger, and all of his pain in the MMA cage. But after he receives one too many hits to the head during a match, the cycle of violence comes to a screeching halt. Cobra wakes up in the hospital, under the care of a nurse whose blond hair shines like a halo—and whose pure heart touches him on the deepest level.

Lorraine Bosch is a fighter too. The lone survivor of a chilling family tragedy, she prides herself on remaining professional, despite the chaos of the ER. But Cobra is the ultimate distraction. Lorraine knows she should run away screaming from his rippling muscles and shattered psyche. And yet how can she deny this broken man a second chance—especially since she knows exactly what he’s been through? Lorraine’s used to playing guardian angel. Now it’s her turn to find heaven in Cobra’s arms.

Destined for a King - The Bastard Brotherhood, #1 by Ashlyn Macnamara

Bestselling author Ashlyn Macnamara, hailed by Jennifer McQuiston as “a born storyteller,” introduces the strapping, audacious outlaws of the Bastard Brotherhood in this enchanting tale of forbidden love between supposedly sworn enemies.

Though she is intended for the king, Calista Thorne picks up a crossbow to defend her ancestral home, Blackbriar Keep, from a gang of landless knights. She even manages to sink a poison-tipped arrow into their commander, who survives long enough to conquer the Keep and claim Calista for his own. Now, with her father’s life at stake, Calista must nurse the brigand back to health, and the strangest thing happens: She finds herself fascinated by his tautly muscled body, and enthralled by his hotly whispered demands.

Ever since his father’s death, the fearsome warrior they call Torch has been consumed by his quest for revenge. Taking Blackbriar Keep is the first step in that plan, and—by the three gods—it won’t be the last. But after taking one look into Calista’s smoldering gray eyes, Torch discovers a passion nobler than retribution. He will fulfill his destiny and take her from the usurper king, even in his weakened state. For with Calista’s love, no man has ever felt more powerful.

Pre-Order - Destined for a King

Lured In - A Fishing for Trouble Novel by Laura Drewry

The O’Donnell brothers continue to cast their lines and find love at the Buoys—their magnificent Pacific Northwest fishing haven—in this alluring romance from the bestselling author of Off the Hook.

Seasick. That’s how Jessie Todd feels when her best friend and boss, Finn O’Donnell, tells her that the Buoys will be featured on a popular fishing program—which just so happens to be hosted by a guy she used to date. She’s still friendly with her ex, but her new feelings for Finn are making things . . . complicated. His life is out on the sea, and though Jessie works at the resort, her paralyzing phobia of water keeps her on land, where she’s safe. To take a shot with Finn, she’ll need to face her fears—and her innermost desires—head-on.

Finn has been nursing a crush on Jess for a long time, so when she suddenly asks for swimming lessons, he dives right in. Holding her shaking hand as she steps into the ocean makes his heart swell—despite the sinking feeling that she’s just doing it to impress that smarmy TV host. Finn doesn’t trust anyone with his bruised and battered heart, but he’ll be forced to lay it all on the line to keep Jess from being the one that got away.

Pre-Order - Lured In - A Fishing for Trouble Novel