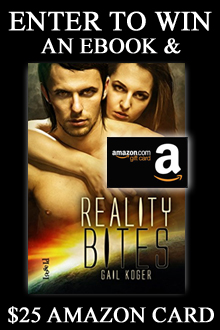 Enter to win a $25 Amazon Card and eBook from hilarious author Gail Koger!

Bree never thought her dimwit act, military grade mace, cattle prod, or dumping a ton of stinky manure on Jaylan's head would encourage his pursuit. Who knew a Coletti warlord would think being zapped with a cattle prod as foreplay? Or that a clever opponent only heightened his enjoyment of the chase?

The chase comes to an abrupt halt when the Tai-Kok attack Tucson, forcing Bree to team up with the Coletti warlord to stop them. Suddenly plucked from Earth by a crazed Tai-Kok commander, Jaylan and Bree find themselves stranded on a hostile alien world, and being tracked by a deadly Askole assassin. Neither of them expected to find love.

I was a 9-1-1 dispatcher for thirty-one years and to keep insanity at bay, I took up writing. Not to worry. The insanity isn’t catching – much. Other than the addiction to chocolate and the twitch in my left eye, I’m good.