Once in a Blue Moon by Sharon Sala + Book Giveaway

Sharon Sala is taking us back to Blessings, Georgia with the below excerpt. Plus you can enter to win a copy. Enjoy and good luck.

Once in a Blue Moon
Blessings, Georgia Book 10
by Sharon Sala
Buy on Amazon

How often do you find a love like this?

Cathy Terry is tired of running. Full of fear and hope, she backpacked across the country to Blessings, Georgia, not knowing if or when her abusive ex-husband would catch up to her. In Blessings she glimpses a safe haven and the closest feeling to home she's had in a long time—even more so when she meets Duke Talbot. The sweet, strong, and handsome rancher provides a shoulder to lean on. The stakes get higher as the community embraces her and her relationship with Duke deepens—but can Cathy claim a new home and family before her past claims her?

Streaks of moonlight slipped between the blinds in Cathy Terry’s bedroom, painting silver-white stripes across the dark hardwood floor. The lights of a passing patrol car swept across the wall where she lay sleeping, but all she saw was the man coming at her in her dream.

“You’re not going anywhere, dammit! Nobody walks out on me!”

Cathy was scared of him, but she’d had enough, and the luxury of their lifestyle was no longer the draw it had once been.

“I’m not nobody! I am your wife, not one of your whores, and I’ve had enough! You have cheated on me for the last time. I’ve already contacted a lawyer, and I’ll be staying in the Luxor here in Vegas until I can find an apartment.”

Cathy ducked and ran, locking herself into their ensuite, and then called the police, crying and begging them to hurry as Blaine pounded on the door in continuing rage.

The sirens and the flashing lights pulling up to the house gave her the reprieve she needed. The moment she heard him leave the room to answer the door, she flew out of the bathroom, grabbed the bag she’d already packed from the closet, and followed him down the stairs.

He was already playing the part of the surprised spouse and telling the police it was all a misunderstanding when Cathy appeared. Her eyes were swollen from crying, and her fear was unmistakable.

“Help me! I’ve filed for divorce and he won’t let me leave!” she said. She was trying to push past him when he grabbed her by the arm.

In the dream, she was struggling to get free, just like she had that night. The police had come into their house at that point, yelling at Blaine to let her go, and he was screaming in her ear, “I’ll make you sorry. You’ll never have another moment’s peace as long as you live!”

Her heart was pounding when she heard a voice from her childhood.

Wake up! Wake up, Mary Cathleen! Wake up now!

She gasped, and then sat straight up in bed and turned on the lamp. The hundred-watt bulb put a whole new light on the moment, helping pull her out of the dream, but she couldn’t deny what she’d heard. That was her mother’s voice, and it had been two years since she’d heard it.

“Oh, Mama, you’re still on my side, even from the grave.” Cathy glanced at the clock.

It was twenty minutes to four, and going back to sleep after that dream wasn’t happening, so she turned on the television, plumped up her pillows, and began scanning the available movies. She didn’t much care what she watched. Anything to get her mind off her ex would suffice.

She was thinking about going to the kitchen for something to snack on when she saw actor Jeffrey Dean Morgan’s face flash on the screen, and she stopped and upped the volume. He was one of her favorites, and being tall, dark, and handsome was the antithesis of Blaine Wagner’s stocky build and blond hair.

That actor is one pretty man. I don’t care what this movie is about. I can mute the whole thing and just sit and look at him. That should get my ex-husband’s face out of my head.

Cathy ran to the kitchen during a commercial and made herself a peanut butter and jelly sandwich, then brought it and a glass of milk back to bed.

By the time the movie was over, the memory of the dream had mostly passed and morning was imminent. She turned off the television and took her dirty dishes back to the kitchen, started a pot of coffee, then headed back to her room to get dressed.

A short while later she was in the kitchen , contemplating her day of doing little to nothing here in Blessings, and remembering her old life in Vegas. 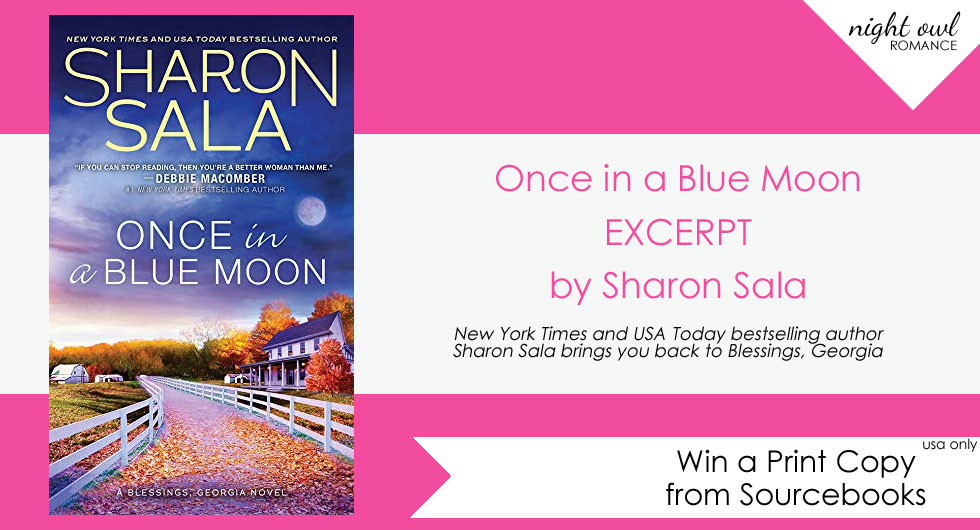