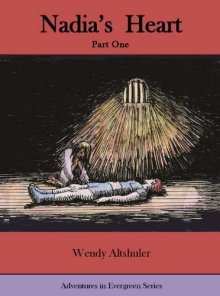 Join us for an excerpt from this imaginative tale.

When an amnesiac girl who suspects her heart is missing utters a prayer, she is met by a mysterious angelic stranger from her forgotten past. Together they embark on a journey to recover her removed heart, but enter into battle with an Evil Voice on a rampage to remove the hearts of an entire generation of children.

EXCERPT: From Nadia’s Heart, Part One

They were now definitely aware that the dogs had changed.

When once they had headed the dogs on along the ice, now it was if they were led by the dogs.  Without even steering, they barely had their bearings when the sled continued up the steep incline.

She sat looking at the gear and felt the cold brown canvas lump which she leaned upon, holding on as the sled jangled.  The team slowed as they turned around the last bend.

They had reached the top of the mountain.  It was a clearing, a circular area, and on its other side continued the road.  In the center was an ice sculpture of about fifteen feet high.  It was a beautiful castle shaped like a mountain surrounded by a spiral road, much like the one they had been traveling on.  One could not tell if they were stairs, or crevices neatly arranged, which led up to a tiny set of double doors.  Some of the men exited with clubs to approach the formation.

“Don’t touch it,” Jasper said in a hushed voice.

And then a strange thing happened.  For Nadia, and the others too, after having looked at Jasper, and then back at the model castle, thought that it had grown, if ever so slightly.  It was larger.  Clearly it was, and each of them checked their standing to see that they hadn’t sunk into a dip.  But it was not only taller, it was wider and bigger all around.

And then it happened again.  After looking up from her boots, Nadia jumped, and Jasper rose, moving out of the sleigh and pushing the men back, staring up at what was once a scale model, but what had now become big enough for a child to enter.  It was big enough to look real, life-like, as if they were giants and this building — it was clearly a castle now, the details of the steps and entrance taking shape — were coming to life.  Even the road was strangely familiar.  Indeed Nadia thought she could see parts that they had traveled on, no matter how vague.  There was the rocky path at its beginning, and an empty clearing, much like the one they stood in now.

It was no use trying not to exchange glances, for they were all startled, and no one spoke.  But the more they did so in their surprise, the more the castle grew before them, until it was a towering monolith, and they were but specs at the foot of its stairs.  By now it had stopped growing, or so they thought.  One could not be sure, but this seemed to be the case, as they looked around and over the cliff.

Looking up the glittering, cold, sparkling stairs, some of the men had gone up a few toward the entrance.  Others were examining its smooth blue green surface, smooth enough to look slippery.  They were met with Jasper’s arm as he made his way to the front, protective, along with Georgeonus.  The night was lit up by moonlight, but the moon was hidden in the haze.  Nadia looked at the dogs, large like wolves now, and their faces were different.  They had settled down against each other.  Some yawned or cleaned their fur.  Others brooded.

Running up the stairs, Nadia followed behind Georgeonus and Jasper.  The rest of the men were close behind.

It was dark inside, and all green.  It was cold.  Their breath formed clouds as they exhaled.  They walked down a long corridor, staring at the walls and ceiling, which seemed to have gotten higher since they entered.  The door through which they had come was even smaller and more distant, and now, their feet echoed slightly.

Coming up ahead was another set of huge double doors, made of wood, and carved with animals of every kind.  Georgeonus stopped at the door, looking up.  He turned to Jasper, and then pushed it lightly.  It opened.

They entered a room, not as bright, and not as cold.  Everything was blue, and the corridor continued down to yet another door.  But something lined the walls, they could see, as they walked through, though all did not notice, right above the lamps that were surrounded by a strange light.  They were… glass cases…and there was something in each of them.  Nadia could not tell what that was, but it was something red and purplish in color.  She now lagged behind the men, curious, and vaguely noticed the glow of Georgeonus’ eyes up ahead as he turned to see where she was.  Her curiosity was heightened, and as Jasper approached the next set of double doors she stepped in a crevice, a small crack in the wall, barely large enough for the toe of her boot to fit into.  She reached for the lamp’s neck which extended from the wall, squinting, determined.

Nadia hoisted herself up into another crevice and peeked, and when the flame of the lamp flickered she jumped back, letting out a stifled yell as Georgeonus covered her mouth.  She looked up in horror, pushing his hand away, as Jasper signaled urgently toward the next door, now opened.  The crouched men ran through and Georgeonus pulled Nadia, still fighting, her metal boots clunking on the floor like heavy roller skates.  They heard the echo of a door slamming, a large, heavy door.  It traveled through all of the corridors.

Nadia wiped her eyes, looking up along the walls and back at the glow of Georgeonus’ eyes.  She was horrified, and she spoke to him without words, screaming the thoughts at him.

MORE IN THE SERIES

The Rescue of Georgeonus - Evergreen Series, #3

Wendy Altshuler is a writer-producer who explores myth in new media. Her credits include award-winning screenwriting and WGA-accredited representation. With a degree in psychology and a Master of Arts from Columbia University, Altshuler documented the work of international choreographers and wrote and produced regional programming for three years. She founded Arborgate Media to create projects that inspire, enrich and entertain through the media of film. Altshuler writes fantasy novels and creates works in the art of stop motion animation.