As a kid, my parents would sometimes make the long drive to visit my grandparents who lived right next to the Tuscarawas River. If we arrived too early and it was a Saturday, the door to Grandpa’s study would be closed. It would slide open precisely at 2:00 p.m.

I found that closed door so mysterious. Years later, I learned what was going on. That was his Scifi movie time, and no one was allowed to interrupt it.

Scifi movies are part of my family’s lineage. I remember funny conversations with my dad about how to build an Interoseter, and my parents using the 1950’s version of The War of the Worlds to explain microbes and our immune systems.

Of course, some favorites have emerged from the hundreds (if not thousands) of Scifi movies I’ve watched. I’ve narrowed it down to five that I found to be particularly spectacular.

It’s hard for me to resist a movie with dinosaurs. Add in Jeff Goldblum, and of course this made my Top 5 list. I wanted to be a paleontologist even into High School, and seeing the reactions of Lauren Dern’s and Sam Neill’s characters when they first see the dinosaurs hits me in the feels every time. This movie combines thrills, entertainment, and some heavy-hitting questions, like all great Scifi should.

Infusing fun into Scifi is also really important to me. Galaxy Quest did an amazing job of creating compelling characters, hilarious situations, and a plot that any Scifi fan could relate to. Who hasn’t wished they were on the bridge of their favorite fictional spaceship? It can’t just be me… There’s so much to love about this movie. It’s campy and funny, but also has characters with substance, dealing with out-of-this-world scenarios in a down-to-Earth way.

3. Invasion of the Body Snatchers

This one is a formative movie for me (the 1978 version, especially). My family moved often during my childhood, and I was pretty much always labeled “the weird girl” in my schools. I did my best to fit in, but in the end, I could never quite pull off normal (not that there really is such a thing). Watching the few remaining humans in this movie do their best to hide their true nature so they could walk among the aliens always had me holding my breath. And that ending… This is another one that can spark some really great discussion about what it means to be human. And hey, Jeff Goldblum again!

Giant robots fighting giant monsters. There is nothing to not love about that. I wish I had seen this one in the theater. It’s such an epic movie! I’m a huge fan of giant monster movies, and this one is my absolute favorite. The production quality was spectacular, the action sequences had me on the edge of my seat, and the back-stories, deftly woven into the narrative, brought me to tears more than once. The story and world were compelling (and yes, I realize a tad…okay, very ridiculous), and it has two of my favorite actors to boot—Idris Elba and Ron Perlman. They added a fair dose of humor and did I mention the production quality? As someone who was raised on movies with people running around in rubber monster suits and hubcaps on string for spaceships, it really blew me away.

There are so many things to love about this movie, including that it introduced me to Vin Diesel. The effects were fantastic and the small cast helped to further the almost claustrophobic feel to the movie, as the remaining survivors are forced into smaller and smaller hiding places. The monsters were truly terrifying, and this one brought in some serious questions as well. I’ve said that the best Scifi stories enable us to explore our humanity by looking at it through an alien lens. It entertains while bringing up questions we might never examine otherwise. What makes someone worthy of redemption? Where are the lines between good and evil in a fight for a group’s survival? This movie twisted my expectations over and over, keeping me wondering who really was the good guy and who was the bad. I walked out of the theater and stood there, stunned, as I questioned my own preconceptions. The best stories are the ones that change us, and this movie absolutely did that for me.

Of course, as thought-provoking as all these movies are, there’s one thing that I always wished to see more of—romance! It’s so great to see stories being written now that have all of the epic adventure, excitement, danger, and thought-provoking questions, while also letting us enjoy watching two characters fall in love and figure out how to be together. In movie form, it seems like sometimes it can be hard to balance the romance and the Scifi elements in a great story. That’s one of the reasons why, at heart, I’m always a reader first.

How about you? What are your favorite Scifi stories? Are they movies or books? Let me know in the comments!

Is he after her heart or her planet?

Evelyn Chambers is a nerdgirl and damned proud of it. When she finds out that her drop-dead gorgeous best friend is an alien general with only three days left of his shore leave on Earth, she has to wrap her head around too much at once. Aliens are real, and if she wants to keep hanging out with one, she’ll have to marry him!

Adam Smith has never seen a planet as beautiful as Earth or a woman as enticing as Evelyn. His government wants him to re-enlist, but the stars seem cold and distant. When Evelyn suggests marriage to help him stay, Adam realizes that what he really wants is her, and he’ll sacrifice everything to be with her.

Can he convince his government—and Evelyn—that he's looking for more than a Gray card?

This is the second edition of the same novella originally released in October of 2015.

Cassandra Chandler has been obsessed with stories for as long as she can remember. A prolific writer, she has several Paranormal and Scifi Romance series that feature aliens, psychics, werewolves, and vampires—sometimes all in the same book. When she's not writing super-sexy love stories, you can find her knitting, chatting with readers, or making weird puppets. She’s active on Twitter (@CassChandler) and Facebook (CassChandlerAuthor) and has an awesome newsletter (http://eepurl.com/boZm9j). 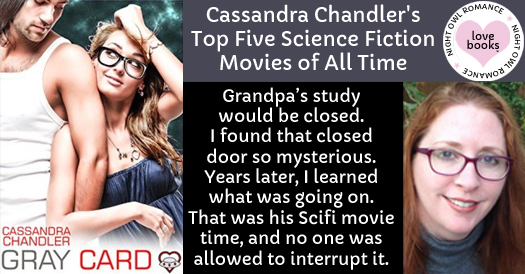