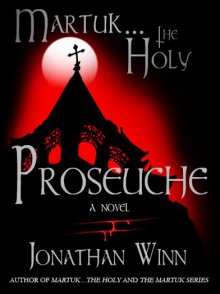 Martuk, The Holy by Jonathan Winn

Get your Horror on with this novel.

And cradled in her kindness, I dove back into the blood soaked memories of this, my life.

With those words, the immortal Maruk's tale continues.

From modern Paris, he speaks of his life in the religious chaos and pagan magic of 3rd century Antioch. Of his friends, a man haunted by grief and regret, and a woman with secrets as thick as the woolen of her constant cloak. Of days marked by the greed of Rome and the ambitions of those driven by dangerous delusion.

He remembers wandering souls who returned with their own stories to tell. Who shared their own memories of blazing deserts and a darkness with teeth. Of being imprisoned in a myth built by the lies of others. And then Martuk recalls a magic so dark it summons demons from a cloudless sky and rips the sleeping dead from their slumber.

The past revisited, Martuk ends his tale with a confession. A modern-day betrayal so cruel, the rest of his life everlasting threatens to be one of searing regret and never-ending shame.

This sequel to Jonathan Winn's Martuk ... the Holy is a tale of stumbling humanity and shocking brutality. Forgiveness and release. Death. Immortality. And the tenuous hope for blessed redemption.

This contest is sponsored by a third party. We are just posting their contest on Night Owl Reviews so our users know of the contest. Prizes are given away by the sponsors and not Night Owl Reviews. The sponsor is solely responsible for the contest prize and winner selection.

Screenwriter, playwright, actor, and author of the award-winning "Martuk ... the Holy" and The Martuk Series (The Wounded King, The Elder, Red and Gold), Jonathan Winn was born in Seattle, WA, and currently divides his time between the East and West coasts.