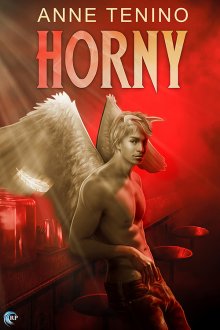 LETTER FROM THE AUTHOR

Normally, I’d babble on about writing the story, or some of the research I did, or possibly the clever and unique way I interpreted Greek mythology, but not this time. Why? Because I have a special treat.

I now present you with—*trumpet fanfare* the Cut Sex Scene.

This scene was cut for a multitude of reasons, but not because it was lacking in hotness. The most pressing issue was that, if Ryan (our mortal bartender) and Leander (our Greek demigod) were to have sex at that point in the story, it created serious trust issues. Bigger ones than could be resolved in a story of 30,000 words. So instead, here it is for you (and yes, I’ll put it up on my site at some point . . .).

Here, Leander and Ryan are getting together for the second time, in Ryan’s apartment.

Somehow they ended up on the floor, the rug in front of the door bunching up under Ryan’s back, and Leander’s hands and mouth all over him, pushing Ryan’s T-shirt up to find his nipples, pulling away from Ryan’s mouth to tongue them. Then he used his teeth and Ryan squeezed his eyes shut and arched up, offering Leander more of whatever he wanted to take.

“Put your arms over your head.”

He did it immediately, then Leander’s strong fingers wrapped around both his wrists, holding them against the wooden floorboards while he twisted to the side, kissing up Ryan’s extended neck. Working one leg under and throwing one leg over Ryan’s thighs, Leander trapped them between his, holding him stretched out and pinned down. Like a staked out offering to a pagan demigod. Then Leander was ripping open the the fly of Ryan’s jeans, shoving his hand inside and grasping Ryan’s shaft as Ryan thrust his hips upward, shuddering.

But he didn’t get the hard and fast handjob he was expecting. Instead Leander let go of him to yank Ryan’s jeans and briefs over his hips, just far enough to expose his dick to air, then he worked fingers under Ryan’s balls, fishing them out and settling them above the elastic waistband.After that, nothing. Just cool air on his cock and chest, and Leander holding him down, both of them breathing heavily. Ryan opened his eyes to see Leander looking at him, gaze traveling slowly up from his groin along his abdomen, then his chest, and finally his face. Staring at him while he reached up and traced Ryan’s cheekbones. Ryan tried to catch at Leander’s fingers with his mouth, but Leander pulled his hand away, settling it on the center of Ryan’s chest, then grasping and pinching his nipple, making Ryan hiss. “Leander.”

“Shhhh.” His lips lifted in a slight smile. Then he began the real torture. With a touch that was too light, he outlined all the features of Ryan’s chest and abdomen. Each of his ribs and his sternum, the underside of his pectoral muscles, the sparse line of hair that started between them and wandered down to his belly button. He stroked the shockingly sensitive area just above his groin and then worked fingers under his buttock, tickling the tender skin where the curve of it met Ryan’s thigh.

“You’re killing me,” he groaned when Leander’s nails scraped through his pubic hair, not quite touching his dick.

“I’m making love to you,” Leander corrected, and Ryan’s breath hitched at the words.

Finally Leander wrapped his hand around Ryan’s cock again, stroking at a steady pace until every muscle in Ryan’s body was straining toward Leander’s hand, and he was gasping with each movement. Then the eroté stopped.

“Noooo,” Ryan moaned, even aware it wouldn’t do any good.

Soft laughter and fingers squirming under his scrotum were the only answers he got before Leander found the sensitive spot behind Ryan’s balls, pressing and rubbing against it, fondling Ryan’s testicles with his other fingers. But that only lasted a minute or so, then Leander began jacking Ryan’s dick again, tightening his legs on Ryan’s thighs until he could barely move his hips. Leander kept up that same steady pace, not changing it no matter how many times Ryan pleaded with him to go faster or how vigorously he twisted against the immortal’s hold on his arms and legs. Ryan used all his strength trying to break free, secure in knowing Leander wouldn’t let him loose, not until he decided it was time.

When he stopped stroking again, Ryan was so close to coming he nearly sobbed, his nuts so tight they tingled and his dick throbbing. Leander rolled on top of him, bringing his now naked body fully over Ryan’s, forcing Ryan’s thighs apart with his legs then twisting his around them and shoving Ryan’s arms even farther over his head, until he was stretched taut.

Ryan strained toward Leander, trying to find the immortal’s hardness with his own just as Leander ground down, bringing his erection alongside Ryan's. A noise fought its way out of Ryan’s throat, but it was muffled by Leander’s mouth coming over his while working his hand under Ryan’s butt, squeezing and rubbing his cheeks, searching out his crack with a long finger, then pressing it into Ryan’s ass as he thrust his cock alongside Ryan’s dick, creating enough friction to start a fire.

Coming while being restrained and weighted down by Leander was a kind of freedom Ryan had never imagined before. Leander forced him further than he’d ever been, coming until his toes curled and his legs spasmed and he overextended his spine, trying to grind his head into the floor while a white-hot-cold ball of fire shot up his spine and exploded through his ass and cock. His whole world resided there in those seconds. For the first time ever, he didn’t have to guard against dissolving completely into the sensation, because someone held him together through it, and would continue to hold him after.

In that moment, he believed that was possible.

Ryan Caulfield is a devout avoider of risk, so it comes as a surprise when he agrees to help a group of supernatural law enforcers catch Zeus (the god voted Least Likely to Keep It in His Pants). But how could he say no? He’s nothing if not law-abiding, even if it’s a legal code from another plane of existence. Besides, it all seems harmless enough . . . at least until the half-naked and all-hot immortal with wings and horns shows up.

In his century as an investigator for the Olympic pantheon, Leander of the eroté has solved a lot of cases and slept with a lot of humans. But on this investigation, it looks like he won’t be doing either. His assigned task is bogus, and the most alluring mortal he’s ever met is determined to avoid hooking up.

But the pull Leander feels toward Ryan the bartender won’t let him turn his attention away for long. Soon, he finds himself interested in much more than his usual dalliances with mortals. Now if only he can convince Ryan he’s worth the risk.

Raised on a steady diet of Monty Python, classical music and the visual arts, Anne Tenino was—famously—the first patient diagnosed with Compulsive Romantic Disorder. Since that day, Anne has taken on conquering the M/M world through therapeutic writing. Finding out who those guys having sex in her head are and what to do with them has been extremely liberating.

Anne's husband finds it liberating as well, although in a somewhat different way. Her two daughters are mildly confused by Anne's need to twist Ken dolls into odd positions. However, other than occasionally stealing Ken1's strap-on, they let Mom do her thing without interference.

Wondering what Anne does in her spare time? Mostly she lies on the couch, eats bonbons and shirks housework.

Check out what Anne’s up to now by visiting her site. http://annetenino.com