Take a trip into fantasy in this F/F romance. 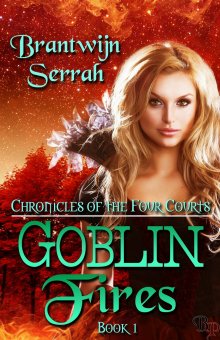 From the moment she laid eyes on sweet Ceri, Reagan knew she would be lost forever. A Sidhe Royal, though, could never return such feelings for a War-Child...

As the daughter of the fae Goddess of War, Reagan was sworn into service to the Sidhe monarchies before she was born.  Her contract forever binds her to the beautiful goblin princess Ceridwen. When an unseen enemy threatens the Fae Courts, Ceridwen is caught in the attack, and Reagan must fight to the ends of the earth to save her. But will this battle tear her away from her princess forever?

We came out on the other side of the park, across from the Terrace, in time to see the three Princesses and Erin emerge from the restaurant patio, bright with conversation. There were flittering butterflies—or at least, what mortals would take to be butterflies—drifting playfully around them. Pixies, three of them: one dusky lavender, one a pale coral orange, and one pristine white.

It happened in a perfect storm of a moment. Ceri distracted me, my head perhaps too busy with all Finn had said. She captivated me, such a joy to behold, and in the beautiful noonday sun all the pretty kindness of her face radiated, brimming with unspeakable serenity. She walked between Nina and Neri, laughing at something Nina told her. Erin and Puca scampered ahead, the latter bounding and barking at the coral-colored pixie with seamless dog-like excitement.

We had no reason to expect danger. I brushed at the snowflake-white pixie, who flew up very close to tug prankishly at my hair, trying to shoo it away as I watched the girls enter the street at the light change.

Then—almost too late—I realized the little creature wasn't trying to play with me.

It wanted to get my attention.

That's when my hackles raised and my spine stiffened. I sensed it—a brief split-second warning, a flutter of heat in my stomach: my portent of ill to come. Finn noticed me react and in turn he lunged to be ready. I saw it first, though, coming up the street too fast, swerving between lanes, and heedless of the light: an old, rusted, ugly car, something enormous and boat-like, full of dents.

Careening straight for the Ladies.

We moved quickly. I have said I am no hand at magic but this is why: as the adrenaline rushed through my limbs, I surrendered to a surge of unearthly power. I launched myself into the street like a charging beast, lunging violently through the knot of strolling pedestrians, and avoiding collision with wildly preternatural speed. Finn, even bigger and broader than I, danced through the started people with the precision of a practiced gymnast.

Erin stumbled, caught off guard as she saw us rushing at her; at the same time a blue truck waiting to turn noticed the oncoming sedan and sped up to get out of the way.

I grabbed the handmaiden and swept her to one side, bringing my hand down on the truck's bumper hard enough to dent it as I forced it to a stop. A second vehicle, a utility SUV leaving the park, saw the rust-bucket coming and swerved to the right to avoid being hit; Finn squared himself in front of it, seizing the grill in both hands before it could barrel through the crosswalk. I bounded up over the hood of the truck and managed to grab Nina and Ceridwen out of the way of the oncoming car.

Neri, though, froze, caught in an instant of paralyzing shock. The rust-bucket screeched, desperately trying to squeal to a stop... and instead going into a skid.

This contest is sponsored by a third party. We are just posting their contest on Night Owl Reviews so our users know of the contest. Prizes are given away by the sponsors and not Night Owl Reviews. The sponsor is solely responsible for the contest prize and winner selection.

When she isn't visiting the worlds of immortals, demons, dragons and goblins, Brantwijn fills her time with artistic endeavors: sketching, painting, customizing My Little Ponies and sewing plushies for friends. She can't handle coffee unless there's enough cream and sugar to make it a milkshake, but try and sweeten her tea and she will never forgive you. She moonlights as a futon for four lazy cats, loves tabletop role-play games, and can spend hours watching Futurama, Claymore or Buffy the Vampire Slayer while she writes or draws.

In addition to Lotus Petals, Brantwijn has had several stories published in anthologies by Breathless Press, including the 2013 Crimson Anthology and 2014 Ravaged Anthology. She's also had a short story published in the Cleiss Press Big Book of Orgasm, and hopes to have several more tales to tell as time goes on. She has author pages on GoodReads and Amazon and loves to see reader comments on her work. Her short stories occasionally pop up at Foreplay and Fangs, her blog at http://brantwijn.blogspot.com.