Rebecca Rivard’s Top 5 Shifter Series: Is Yours on the List? #TopList

Before I was a writer, I was a reader. I devoured everything from romance to lit fic to mysteries. I loved paranormals before it was a named genre—Bram Stoker’s Dracula, Mary Shelley’s Frankenstein and Anne Rice’s Interview with a Vampire (OMG, the vampire Lestat is so fascinating, isn’t he?).

When paranormal romance hit big, I was thrilled because a good romance is even better with a little magic, isn’t it? And then I started thinking, maybe I could write one of these? And my Fada Shapeshifters series was born…

There are so many good shapeshifter series out there, but here are some of my go-to series, the books I’ve read over and over. The list is in no particular order—I love them all!

Beautiful, glittering, dangerous… The dragon shifters in Shana Abé’s Drákon series are some of the most fascinating characters in paranormal romance. Abé is the rare author who can write both beautiful sentences and tell an enthralling story. I was captivated from the first book, The Smoke Thief, when Kit, the gorgeous blond alpha of Darkfrith, sets out to find the daring jewel thief who seems to be able to walk through walls and vanish into thin air—only to discover the thief is a woman, and a powerful dragon shifter who by rights should be his mate.

I was hooked on Jennifer Ashley’s shifters from the first sighting of Liam Morrissey, a sexy Irish shifter with black hair and sky-blue eyes, in Pride Mates. The shifters in Ashley’s world are considered dangerous animals by fearful humans. They’re collared and forced to live in Shiftertowns, but within their towns the family and clan are everything. The males are the best kind of alpha—protective and loving—and there’s always a good dose of action to keep the plot moving.

No list of shapeshifter series would be complete without Nalini Singh. Her Psy-Changelings series get high marks for originality, with the changelings (shifters) and the psy, a race with psychic gifts, battling for supremacy along with the third race in her world, humans. Lucas, the cat changeling in Slave to Sensation, is one of my all-time fav alphas, with Hawke, the alpha wolf in Kiss of Snow, coming in a close second. The stories get more complex as the series continues, with a dozen-plus books to sink your incisors into. Be warned that the stories are intense, with serial killers and other nasty villains.

Charles, the Native American werewolf in Patricia Briggs’ Alpha and Omega series, is just so hot with his big body and long black hair. An enforcer for his alpha dad, Charles is the baddest werewolf around. But with Anna, the physically abused werewolf who turns out to be his mate, Charles is sweet and loving—the perfect alpha male. Start with the novella Alpha and Omega and then move on to Cry Wolf. But a heads-up—like the Psy-Changeling series, the stories are dark, and as an urban fantasy author, Briggs’ stories are light on romance. That said, what she includes is real and true so that I fell in love with Anna and Charles as a couple.

I have to give a shout out to two early favs. I know Frankenstein isn’t exactly a shapeshifter, but the book definitely sparked my love of paranormal romance—and dark, gothic stories. (Watch for the movie about Mary Shelley coming this summer!)

And Dracula may be a vampire—but he’s also a shapeshifter. If you read the book, you’ll find him described as an animal resembling “a large dog” at one point. And of course, vampires have traditionally been able to shift to bats…

What about you? What are some of your favorite shifter series?

A child in danger. A dad with a secret. And a second chance at romance…
Four years ago, Irish shifter Cassidy O’Byrne fell hard for a sexy Latino from the Rock Run Clan. Nic do Rio was dark, brooding—and irresistible. But Nic was keeping a secret, and in the end he left, unknowingly leaving her expecting their baby.

An orphan herself, Cassidy loves her three-year-old daughter with everything she has. But Nic’s secret makes the little girl invaluable to the fae. When a powerful fae comes for Rianna, Cassidy runs with her to the only man who might be able to save them—Nic.

Nic never expected to get a second chance with Cassidy, but he wants both her and his daughter with all the hunger of his dark, lonely heart. Will the pair find love, only to lose their daughter to the fae?

NOTE: Sea Dragon's Hunger is Book 4.5 in the Fada Shapeshifters Series, set in the California Sea Fada world. All books are standalone with an HEA, but the stories interconnect. If you love dark alpha shifters and intense emotional storylines, this book is for you.

THE FADA.
Shapeshifters created during Dionysus’s infamous bacchanals from a mix of fae, human and animal genes.
They’re ruthless, untamed—and when they love, it's forever.

Rebecca Rivard is a USA Today bestselling author of steamy paranormal romance. Her books have finaled in the Prism, EPIC, and RONE awards, and her novel Saving Jace (#4, Fada Shapeshifters) is a 2018 RONE nominee for Best Long Paranormal Romance.

Her Fada Shapeshifters series features tattooed, motorcycle-riding shifters and their beautiful but dangerous fae rivals.  If you love dark alpha males and intense emotional storylines, her books are for you. You can find the Fada Shapeshifters at: http://rebeccarivard.com/shapeshifters/] 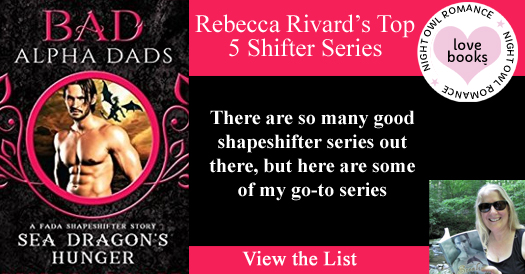