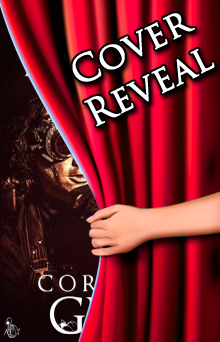 Today we have a wonderful cover reveal for you.

Thomas Escott has always wanted to be a toymaker, yet just as he achieves his dream, an accident claims his right hand. He’s certain his life is over—until he hears about groundbreaking prosthetics being made by a reclusive inventor.

Jethro Hastings is perfectly content to live alone up in the mountains working on a secret masterpiece: a humanoid automaton that will change the scientific community forever. He’s behind schedule, and the date of the unveiling is fast approaching, so when Thomas shows up on his doorstep offering help in exchange for a mechanical hand, Jethro agrees. Time, after all, is running out on another deal he’s made: one with the devil.

The devil gives Jethro’s inventions life, but he can just as quickly take life away—Jethro’s, to be exact. As the sand in the devil’s hourglass falls, marking the time until the end of the deal, inventions go haywire, people get hurt, and Thomas realizes he needs Jethro just as much as his prosthetic. Now he must find a way to save Jethro’s soul, but negotiating with a devil is just as difficult as it sounds.

Cornelia Grey is a creative writing student fresh out of university, with a penchant for fine arts and the blues. Born and raised in the hills of Northern Italy, where she collected her share of poetry and narrative prizes, Cornelia moved to London to pursue her studies.

After graduating with top grades, she is now busy with internships: literary agencies, publishing houses, and creative departments handling book series, among others. She also works as a freelance translator.

She likes cats, knitting, performing in theatre, going to museums, collecting mugs, and hanging out with her grandma. When writing, she favors curious, surreal stories, steampunk, and mixed-genre fiction. Her heroes are always underdogs, and she loves them for it.