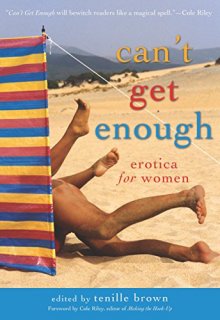 Excerpt: Can’t Get Enough: Erotica for Women by Tenille Brown

Today we bring you an anthology for women who are looking for something on the more spicy side.

Can't Get Enough - Erotica for Women

Veteran erotica author and first-time editor Tenille Brown has collected stories for Can’t Get Enough that highlight the essence of insatiable desire. With contributions from authors like Rachel Kramer Bussel, Jacqueline Applebee, Giselle Renarde, and featuring a brand-new Becoming Hers (formerly Dominatrix Fantasy) story from New York Times bestseller Shoshanna Evers, this is a book full of diverse and dynamic characters who are bold and daring even when being sexily subtle. The authors here knock the Can’t Get Enough theme right out of the park with stories that will leave readers as breathless as the characters they’re reading about, dying for more.

Excerpt from “Sleepless Need” by Monica Corwin, part of the larger anthology Can’t Get Enough: Erotica for Women, edited by Tenille Brown

Writing and sex are my only two vices, each fueling the other and each keeping me at a modicum of control. I am a sex addict. I want it all the time, no matter where, no matter with whom. Sometimes I can stanch the urge by reading old journal entries, but sometimes not. For some reason I was feeling it worse today than yesterday.

I tapped my pen down on the notebook, imagining last night’s romp, letting it fill me up and take me back to his arms. The bell above the diner’s door snapped me from the phantom lover’s embrace, as did the beautiful specimen that entered.

Sharp and instant, the longing enveloped me. Each breath in and out of my lungs became more difficult as my body went molten. He looked around, his eyes meeting mine for a moment as he swept the room with his gaze.

I watched him as he sat toward the other end of the diner. His skin was toffee-colored. The need to run my fingers through the silky black curtain of his hair struck me, and I was on my feet before I could stop the impulse. The waitress was in the back somewhere, the cook nowhere in sight. I walked slowly across the black-and-white-checkered tiles until I stood next to his table.

One perfectly arched brow rose as he noticed me. I captured my bottom lip between my teeth, biting down, trying to take some of the edge off, maybe get out at least an explanation before I jumped him. We stared into each other’s eyes, and I knew what he saw in me. A somewhat overly curvy girl with striking blue eyes and a smattering of freckles, with pens sticking out of her head. Not necessarily a wet dream come to life.

I cleared my throat.

“Hi,” I started. It was not the most eloquent way to start what was soon to become an awkward conversation.

“Hi.” A small grin played on the corner of his lip, and the only thing that I could think about at that moment was licking that tiny corner. I pushed the air from my lungs, depriving myself of oxygen so my body could get a grip.

I swallowed and gulped air before opening my mouth again.

“Do you think you could come outside with me for a second?”

His brow wrinkled but he must have been intrigued because he stood up and followed me out the door. The bell announced our exit.

“I want you.” It was a simple enough explanation and oddly, it usually worked.

Over the past ten years, TENILLE BROWN’s erotica has been featured online and in over 50 print and eBook anthologies, and her nonfiction writing was included in The Greenwood Encyclopedia of African American Writers. She lives in Atlanta.