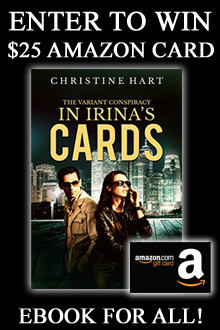 Irina Proffer leaves mundane small-town life behind when she experiences visions inspired by a strange deck of tarot cards. To get answers, she travels from her northern British Columbia home to the province’s coastal capital. She quickly discovers a world of fringe genetic science and supernatural mystery.

Working for Innoviro Industries, Irina is drawn in by a powerful first love and compelling, yet dangerous questions about the nature of the company’s business. Meeting other 'variants' brings Irina closer and closer to the dark truth about her origins. She finds herself at the heart of two overlapping love triangles as she scrambles to escape her employer's grip. Before she leaves the city, Irina realizes she has merely scratched the surface of a frightening conspiracy on a global scale.

This starts a series that needs to be read in order.

The lucky winner is: Amanda A.

Next 2 In the Series!

The Compendium - The Variant Conspiracy Book 2

Irina and her renegade variant friends are scrambling to pick up the trail of their former employer, Ivan, and his globally catastrophic scheme. After strategically sharing their story with the media, the group heads south from Vancouver to Seattle hoping to recruit more experienced—and lethal—variants to their cause.

Their attention develops a laser focus on an engineered disaster mere days ahead of them. Ivan is using what staff and resources remain of Innoviro Industries to set off a violent earthquake in San Francisco. While they fight to stop the earthquake, Irina pushes the love of her life Jonah as far away as she can, trying to keep his unstable genetic degradation in check.

Irina’s friends think they’ve seen the worst that Innoviro could bring forth by the time they reach a secret facility in the Mojave Desert. As they near the property, the group uncovers a horror none of them had ever imagined.

This needs to be read after "In Irina's Cards", The Variant Conspiracy Book 1.